WE ARE SO GRATEFUL TO...
OUR AMAZING SUPPORTERS!

When we started discussing who would be, not only our dream supporters for Rafiki Relay for Education, but also who would feel right… have a genuine affinity with our cause... inspire our scholars, as well as our participants – not to forget someone we would be proud to be associated with – we could not have visualised any that we would be more excited about and more honoured to announce as Rafiki Relay for Education Supporters than these amazing individuals.

Their talent, tenacity and accomplishment despite their individual circumstances and personal challenges is awe-inspiring!

We are so proud to have the support of Cerebral Palsy England International Footballer HARRY BAKER! Harry is incredibly inspirational and a real role model for our scholars and graduates with his success in the face of adversity. We hope they will take courage and motivation from Harry’s ability to fulfil his dreams despite the bleak outlook he was given.

“To hear the stories about young people who have benefitted from Rafiki’s programmes, like Wycliffe who was born with a disfigured foot and could not go to school but who thanks to Rafiki was able to go to school and university and better his life, make you realise that some of us are so privileged and we just need to take time and look after other people” Harry Baker 12th March 2021

Harry was diagnosed with Cerebral Palsy at birth and his parents were told he wouldn’t walk, he would never achieve anything. With the support of his family together with sheer determination and perseverance, Harry proved the doctors wrong (to their delight). He trained himself to walk, and that was only the start. Despite being bullied at school for walking funnily, he had the support and resilience to push through these challenges and secure his education while also becoming a standout footballer – so much so that he was scouted, and now plays for England!! Harry has played more than 30 matches for his country, travelled the world representing his country and played in two World Cups and won a European Golden Boot!

Harry is passionate about boosting the awareness of people with disabilities and disability sport, and is actively reaching out to the younger generation to help them understand and be sympathetic to different abilities and also to encourage them to never give up on their dreams regardless of how insurmountable their challenge may be.

Jack FM recently interviewed Harry and he talked passionately about supporting Rafiki Thabo and our Relay. Amazing! Harry will be taking part in the relay himself and is planning to add up the kilometres by running while training with his England squad! Watch Harry’s personal video message about his own inspirational path to becoming an International footballer, his encouragement to our scholars and to young people everywhere to work hard on their education and reach for their goals, as well as his passionate and enthusiastic call to action: “Please sign up and join in, because it is a great way to raise money and awareness for a brilliant charity, who do brilliant work for young people to get an education!” watch video We are so grateful for all your support Harry!

TIM FOSTER MBE is regarded as one of Britain’s most successful rowers of all time due to his incredible career in which he won numerous gold medals, including his gold medal as part of the coxless four at the Sydney Olympic Games in 2000!

His success truly demonstrates what can be achieved with drive, resilience and determination, it also showcases the importance of interrelationships and empowering each other in a team.

Tim is “passionate about being the best and about empowering people for success and personal vitality.”

We are so very grateful to Tim for supporting our Relay, helping us put the spotlight on the importance of empowering young people through education, for his generous donation of a motivational talk to our Prize draw and for the once-in-a-lifetime opportunity for some of our participants to join Tim in our "Celebration of Achievement!"

Thank you Tim for all your support!

“I am passionate about being the best and about empowering people for success and personal vitality. For the young people in Kenya, Uganda, and Lesotho that Rafiki Thabo support, this empowerment comes through education. Without support, these children would not be able to afford school fees, and their aspirations and dreams of an education, escaping poverty, and fulfilling their potential would be unobtainable. Join me in supporting Rafiki Thabo’s amazing and life transforming work, by taking part in Rafiki Relay for Education – raising money to help support more children through school while we collectively take on the 13,222 km journey through Africa from Cairo to Cape Town! A huge challenge, which can only be achieved with teamwork!” Tim Foster MBE, 25/03/2021

We are so very excited to announce that AMAR LATIF, the Blind Adventurer, is supporting our Relay! Amar says of Rafiki Thabo that we are ‘a really wonderful charity’! Amar is so incredibly inspirational, and such a role model to everyone who has experienced challenges that seem impossible to overcome, and especially for our scholars who are living with disabilities. If you have not yet seen it, watch him on Ted Talk!

His determination not to let his perceived disability stand in the way of success resulted in fulfilling his dreams, first becoming an accountant and eventually Head of Commercial Finance for British Telecom, despite being told ‘a blind person could not be an accountant’, and then in his travels.

Amar is a passionate traveller and adventurer. He first caught the travel bug in his third year of university, when he spent a year abroad studying in Canada. The experience showed Amar that being blind didn't have to mean never seeing the world, but when he sought to take his adventures further afield he found himself facing rejection after rejection. Conventional travel companies refused to take him as an independent blind traveller, and so Amar set out to establish a company that would. Determined to travel the world, and to empower thousands of other blind travellers to do the same, Amar founded Traveleyes. Now a world-unique, award-winning tour operator, Traveleyes offers over 70 destinations a year, and provides an innovative way for blind and sighted travellers to explore the world together.

Visit his travel company website and let Amar show you the world! Read more about Amar

Thank you Amar, for being such an inspiration to us all! We are so grateful for your support, endorsing our cause and our relay!

MARA YAMAUCHI is a two-time Olympian, the 2nd fastest GB marathon runner ever! Mara developed her lifetime passion for running, growing up in Kenya and decided at only 11 years old that she wanted to become and Olympian having been inspired by the 1984 Los Angeles Olympics.

It took 24 years and a huge amount of motivation, perseverance and overcoming setbacks before she realised her dream at the 2008 Beijing Olympics, and then again at the historic London Olympics in 2012! A true inspiration and demonstration how we should never give up on our dreams.

Mara retired from elite competition in 2013 and holds a British Athletics ‘Athletics Coach’ licence. She offers coaching to all levels of distance runners, covering topics including training, race preparation, nutrition, hydration, injury-prevention, strength & conditioning, and mental training. She coaches in person or remotely, and offers coaching individually or in small groups. She also does running workshops and talks (theory and/or practical) for clubs, companies and other organisations. Please visit her website to learn more about Mara - Olympian – Coach – Speaker

We are so grateful to Mara for being such an inspiration, for her generous donation of a 1-2-1 running coaching session for our Prize Draw and for her for her support!

Ben Williams is a member of the world-famous Magic Circle, the world’s most prestigious magic society. With over ten years’ experience in the magic industry Ben has a wealth of knowledge about the magical arts. We had the absolute pleasure of being mesmerized by Ben’s table magic at Rafiki Thabo’s inaugural gala dinner in 2018, when our guest speaker ex-Formula 1 driver Mark Webber responded with a most baffled face and the words: “Wow! I mean, I have no idea! That certainly is unbelievable!”

Have a look at his website to learn more about Ben and see film footage of him in action! unbelievablemagic.com Ben has entertained countless A-List Celebs and has even advised top TV Magicians such as David Blaine and Dynamo. Check these out (more on his website)!

Persistence London clothing is worn all around the world, including by footballers such a Mason Mount, Mason Greenwood and Callum Hudson Odoi. All Persistence London designs are influenced by London with each style named after a famous London Street.

Founded by Ryan Barrass in October 2017, the brand name Persistence London was carefully chosen for its meaning: "The act of continuing in an opinion or course of action in spite of difficulty or opposition." It is a brand designed for the Driven, Motivated and the Persistent. While the context of fashion may be different to that of enabling education, the underlying aspirations and pursuit of a goal, mirrors that of our scholars, graduates and inspirational supporters – succeeding in the face of adversity, whatever the perceived insurmountable challenge may be.

HEADLINE SPONSOR A big shout out to our fabulous partner Charitable Travel for their support with this event!

Charitable Travel is a registered social enterprise and a financially protected travel agency. Their purpose and mission are to help you with your holiday plans and at the same time support the great work that UK-based charities deliver around the world. When you book a holiday or cruise with Charitable Travel, they sacrifice their travel agency commission so you can make a free five percent donation to your choice of registered charity through their dedicated JustGiving website – and we would love for that to be Rafiki Thabo Foundation! Charitable Travel pride themselves in offering travel expertise, a wide choice of holiday options, quality, great value and a unique way of creating travel-for-good for their customers as a true not-for-private-profit social enterprise.

Every penny of profit earned by Charitable Travel, everything they do and everything they offer their customers, supports charity fundraising and good causes. Not only that, but their Charitable portfolio is expanding at an incredible speed under the energetic leadership of their founder Melissa Tilling. There is now Charitable PR & Podcasts, Charitable Radio and Charitable Shopping! We are so proud to be one of Charitable Travel’s partner charities and can’t wait to see what is next in this exciting journey together!

Sasps Designs is the online portfolio and shop of Cotswold based artist, writer, and jewellery designer Sarah Jarman, motivated by her beautiful surroundings she finds inspiration in everyday life. Sarah has always had a passion to draw, write and create and Sasps Designs was born from this desire. Sarah is available to take on both writing and artistic commissions. We are so grateful to Sarah for her kind donation of four pairs of stunning Sasps Designs earrings! http://www.saspsdesigns.com/

Quite the Champion is a new luxury sporting brand offering high-end bags and accessories that are enduring, classic and timeless. Honey (11) and Coco (9) started their business during lockdown when they were given the homeschooling project of starting a brand – choosing a product and name, and then working out how best to market and sell it. Their love of ponies steered them towards equestrian accessories, and their love of competing helped influence their brand name. With great excitement the orders kept rolling in and thus Quite the Champion has become a bit more than a school project! Thank you so much girls for donating the fabulous Original Travel Bag from your range for our Prize Draw! Thank you so much to the very talented Honey and Coco! https://www.quitethechampion.com/ 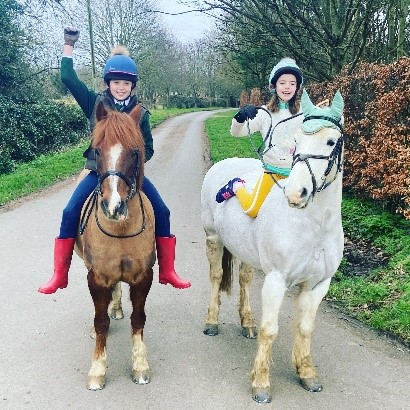